I am deeply saddened from all the pro-NAFTA posts I have seen from my otherwise well informed, left leaning friends. Please stop it. You are doing exactly what the other folks do. Just because Trump is against something does not mean you should love it. Life is not that simple.

Absolutely everything out of Trump’s mouth is not wrong. While the things that he says that are wrong are so very, very wrong I could never look past them, some of the stuff he says is alright. Like NAFTA was a bad idea and the TPP is too. Don’t want to trust me? Bernie Sanders is against the TPP as well. So were many of you until all of sudden now when Trump says he is against it many of you have back tracked and are saying maybe TPP isn’t so bad. I mean if Trump is against it then I have to love it, right? WRONG.

Let me guess… you don’t really, and I mean REALLY, even know what NAFTA is right? Outside of the North American Free Trade Agreement and possibly a middle school level explanation a teacher gave you years ago. It’s okay. No one can see you reading this, even me, so you only have to admit it to yourself.

Let me tell you a little about NAFTA:

Corn farmers in the US get government subsidies. That means the US government pays them to grow corn. Mexican farmers do not get paid to grow corn. That means that in small, local markets all over Mexico corn that was grown in the United States and shipped on trucks all the way to Mexico is still cheaper than the corn Jose right down the road grew on his farm. So Jose goes broke because if you’re a poor Mexican you buy the cheap corn.

NAFTA took land away from the indigenous people’s of Mexico and sold it to US corporations. People that had been living on the land for hundreds, even thousands, of years all of a sudden found themselves kicked off their homesteads with nowhere to go. Men in suits came with papers saying this land belongs to us now, built fences, and bull dozed homes. What were the people to do? (Look into the Zapatista movement)

US corporations, took the indigenous peoples’ land and built factories on it, told them they could then have jobs paying shit in the factory that was on the land their ancestors had lived on since the beginning, the wages are menial, the products are then shipped back to the US (tariff free) and sold at incredible markup to keep the companies getting ever richer.

When people lose their ancestral homes, or lose their farms due to cheaper US foods coming in they often turn to the only thing they can to keep their families alive: crime. Cartels grow, murders grow, kidnappings grow, theft grows, the gun trade grows and more. These gangs are often formed by families that lost their land and lost their livelihood to NAFTA. Most of the drugs are then shipped to the US to be sold to the very people that took away the only way of life they had ever known. So we, the people of the United States, took what was theirs, called it our own, and now blame them for the crime we created.

Others, the ones that don’t turn to crime, may risk their lives to get to the US. They illegally cross the border, to live in the shadows, bust their asses working long hours and living in shit conditions, under the constant fear of being found out and deported and all the while being harassed by the right just so they can send money home to support the families that they used to support with their farm. Their farm they lost because of NAFTA .

And I haven’t even touched on how NAFTA is responsible for the sad state of Flint, Michigan these days. I haven’t mentioned how over one million US jobs have been lost do to NAFTA. And I won’t. You have Google. Go! 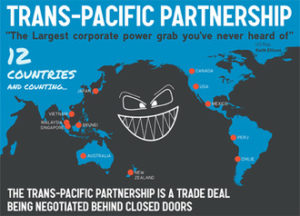 Now the TPP is a plan that will do the same things and have all the same effects but on even more countries. New Balance, as a company, is anti-TransPacific Partnership because of the worldwide negative effects it will have. Donald Trump is also anti TPP. When Matthew LeBretton of New Balance said “The Obama administration turned a deaf ear to us, and, frankly, with president-elect Trump, we feel things are going to move in the right direction.” he was not speaking of hate, he was speaking of keeping factories in America. On this topic I agree with Trump and I am not ashamed to admit it. I am anti-NAFTA and I am anti-TPP. It has been a complete PR disaster for them and we, the left, should stand behind them and show them our support.

I will still wear my New Balance shoes and I will wear them proudly.

So let’s talk about the presidential election. I was not surprised by the results. I know many of you were and I am fully prepared for all the hate that will come my way for saying this but many people simply don’t see reality. I believe it is human nature but far too many people fall for the False-Consensus Bias. That’s what my husband and I call the Look Left, Look Right Syndrome. If all your friends drink a twelve pack a night that’s what you think is normal. In the same way if all your friends lean one political way that’s what you think is normal. Also, most people swear they are not under the bias of False Consensus and that they are realists. Let me assure you my friends, you are wrong.

Most of the people I am friends with, therefore most of the people that will read this, are from major cities. Most people in cities lean to the left. When is the last time you spent any real time outside of the city? Like more than a day trip to the mountains or perhaps a weekend visit to the in-laws? Before leaving the country 2 years ago I had spent the last 5 years in the most conservative county of one of the most conservative states of America. I spent 5 years surrounded by the people that elected Trump. In fact ¾ of my life has been spent outside of big cities in the US. I have always been the outsider, the one liberal in a sea of red.

Many of my friends are from Atlanta so I will share this picture of the Atlanta voting map taken from the Atlanta Journal-Constitution.

You voted Democrat right? And everyone you know voted Democrat right? So how did this happen? Most likely it is true. I mean look at this map. You live in the city, you have always lived in the city, you spend very little time outside of the city, you’re probably one of those people that after 5 years never once came to one of my monthly parties because it was in the ever-dreaded OTP (Outside The Perimeter), and so the liberal lean you have seems normal to you. But you see where it turns red up there? That’s where I spent my last 5 years in Georgia. ¾ of my life has been in various red areas of our national map!!! I know how they think and I know they are there.

I have been complaining about, and terrified of this growing hate-filled, anti-intellectual, pro-ignorance movement in the US for a long time. When I talk about it or warn about it, as I am often prone to do, I am always met with resistance. I have people tell me I am exaggerating. They tell me I am overreacting. They tell me I am too cynical. They tell me it’s not really that bad, that I should calm down, things are getting better and better. They give me condescending lectures and act like they know better than me. They say things like oh, you just think that way because you’ve had bad experiences. Look! We even have a black man as president! I have warned and warned about this coming and no one listens. Why do they not listen? Because they live in liberal bubbles of the big cities and they think that it is normal for the rest of the country. I saw it coming and I left. Now that the US has elected a hatemongering, racist, sexist, Islamaphobic, pussy-grabbing, reality TV star as our president will I be taken seriously? Probably not. It’s okay. I’m used to it.
Want a feel for what America is like? Get out of your comfort zone. Leave the city and do it often. Choose some random small town and go spend the weekend in it. Eat in greasy spoons. Talk to the locals. You’ll see they are nothing like the people you know in the city. You don’t have to go far. Less than 2 hours from your home and I assure you it’s a different world. If you do that you will begin to understand that the United States of America is not the place you think it is. Well maybe this election made you see that but spending time outside of the city, real time not just the occasional drive through, will make you understand why.